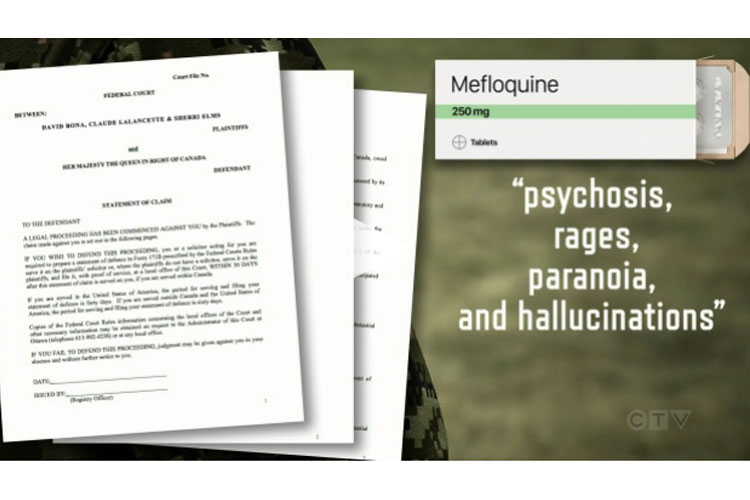 Eight former Canadian soldiers are suing the government of Canada, claiming they were poisoned by a military-issued anti-malarial drug while on missions in Somalia, Rwanda and Afghanistan. Seeking more than $10 million each, the veterans say their lives have been destroyed by the drug Mefloquine.

Lawyer Paul Miller is representing the former soldiers and says his clients were forced to take the drug and are still living with the side effects, including psychosis, rage, paranoia, insomnia and tinnitus.

“The soldiers had no choice in taking the medication. They were under fear of court martial and imprisonment if they didn’t take it. There was fraudulent concealment of the side effects and they were never told that if you suffer certain side affects you need to discontinue the medication,” Miller said.

Retired Sgt. Richard Schumann, who plans to add his name to the mass tort action, says his life has been destroyed by Mefloquine. (W5)

The mass tort, similar to a class-action lawsuit, will be filed on Wednesday, but CTV News has been given an advance copy of the claims, which are expected to eventually grow into the thousands.

Among the eight soldiers represented in this first wave of lawsuits is Brad Elms, a former captain who was ordered to take Mefloquine on missions to Somalia, Haiti and Afghanistan. The suit, on behalf of his estate and his widow, claims: “Capt. Elms died by suicide on November 3, 2014, as a result of serious neurological and psychiatric side effects caused by Mefloquine.”

At a recent town hall meeting in Kingston, Ont., dozens of veterans gathered to hear details of the legal action against the government, including retired Sgt. Richard Schumann, who was ordered to take Mefloquine in Afghanistan in 2005. Schumann says he experienced horrifyingly vivid dreams, including one of suicide that almost cost him his life.

“I attempted suicide in my dream. I remember taking my side arm, cocking the action, chambered a round and put the barrel in my mouth.” Schumann says he pulled the trigger in a dream that he was unknowingly acting out in real life. “My fire team partner was beside me in the bed space, and he heard me cock the action of my C-7. Here I was standing there with a chambered round on the edge of my cot getting ready to spin my rifle around.”

Schumann, who plans to add his name to the mass tort action, says his life has been destroyed by Mefloquine. He can’t sleep, he has seizures, tingling in the limbs and night terrors.

Some experts believe that some veterans who took the drug may be misdiagnosed with post-traumatic stress disorder.

The drug company’s own warning label cautions about the potential for serious side effects that can last for years. However, a 2017 Health Canada report found “limited evidence” that the drug causes “long lasting and permanent adverse events.”

The statement of claim alleges that the government “continues to willfully deny and conceal the risks” of the drug. These claims have not been tested in court.

Mefloquine is no longer used by the Canadian military as a first line of defence against malaria but the drug is still authorized for sale in Canada.