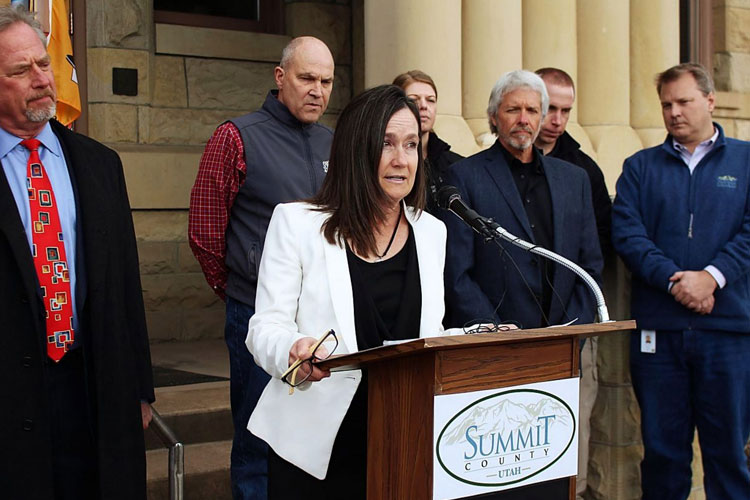 Margaret Olson, Summit County attorney, announces the county’s lawsuit against opioid manufacturers and distributors on the steps of the County Courthouse in Coalville in 2018.

While Summit County’s lawsuit against some of the country’s largest opioid manufacturers and distributors slowly moves through the court system, County Attorney Margaret Olson says a settlement agreement won’t be accepted unless it “fully compensates the people of the county.”

Olson’s comments were made in reference to the $270 million settlement the state of Oklahoma and Purdue Pharma reached last month. Summit County’s lawsuit names more than two dozen businesses and individuals from nine major opioid manufactures and distributors, including Purdue Pharma, the makers of OxyContin.

Oklahoma’s decision to enter into a settlement has raised questions for other jurisdictions where similar lawsuits have been filed against Purdue Pharma, including Summit County. However, Olson said the county’s legal team will continue to pursue the case and a settlement will only be reached if it is in the community’s best interest.

“I feel confident that the team of attorneys representing Summit County will zealously pursue Summit County’s remedies and damages … despite what is going on around the country to ensure they will get the best results for us,” she said.

In 2018, Summit County became the first county in Utah to file a lawsuit against opioid manufacturers, contending that the county has been forced to spend a significant amount of money to combat the opioid epidemic locally, a similar argument that is being made in hundreds of other cases.

Three firms were retained to represent the county, including Napoli Shkolnik PLLC, a New York City-based firm that is also representing more than 100 counties across the country in similar suits.

The 240-page complaint filed in Summit County’s 3rd District Court claims deceptive and misleading marketing campaigns of the opioid manufacturers and distributors led to the national opioid epidemic. More than a dozen other suits have been filed across the state.

The suit has been inching its way through the court system over the last year, a pace that is not uncommon when plaintiffs are taking action against multiple defendants.

“We still have to complete the pleadings portion of the case, which is the complaint-and-answer part,” Olson said. “There haven’t been any answers filed. This is moving very slowly, as mass tort litigation does.”

“He (judge) did not consolidate the other cases that aren’t in the 3rd District Court into the county’s case because he couldn’t reach into other districts and stipulate to consolidate,” she said. “It is likely, though, that most of the other cases will eventually be consolidated into ours. But, some counties are still planning to go it alone.”